A recent beer conversation sparked the request for me to repost this BLOG post from a ways back. Hope you like it. 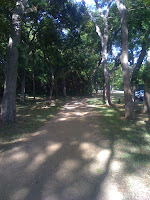 I have really been getting into using my bike to get back into shape. It has become almost a daily obsession to ride a least a little bit. Our neighborhood joins up with an amazing greenbelt that includes some mountain bike trails and a long hike and bike trail that extends from a man-made lake at one end to my “thinking tree” on the other. It’s a fantastic ride and one that I make a lot – both by myself and with the boys.

Anyway one of my habits is to say good morning or good afternoon to virtually everyone that I see. Regardless of whether people acknowledge me as I zip past or not is not important, its the fact that I do it and keep doing it. It’s my own personal action that I take to ensure that the introverted side of me always knows that I am battling to keep it suppressed. It works to and it’s a lesson that Josh has picked up on as he now acknowledges people as he peddles his little legs off to keep up with big brother and Daddy. Talk about making some people’s day when they see that smiling little face say “good morning” or “good evening.” It’s a trip.

About a month ago the boys and I were riding the trail early on a Saturday morning. We came to a long stretch where the trail is fairly straight and we came across about three or four different sets of people. I did my usual good morning to each person or pair of people as we came upon them. I had noticed that a young couple had watched me do this as I came closer and closer to them and as we came upon them they failed to even acknowledge my greeting. As I peddled by they leaned in to one another and seemed to giggle at my expense. I paid it no mind as I peddled on to catch up to the boys.

The next day I was out on without the boys and came upon a similar stretch of people and that same couple. I acknowledged each person as I passed by with a good morning and when I reached the same young couple they burst out laughing and mumbled something. I am not exactly sure what it was that they said but I distinctly heard the man say, “Here comes good morning guy,” and something else that I couldn’t make out.

I instantly felt like that kid that was picked on in school. I hated being made fun of when I was little and their catty way of making fun of me made me feel about three feet tall. Was I the weird guy on the trail and was my greeting of people somehow strange to others? It bothered me and as I rode down to the thinking tree I kept mulling it over in my mind.

Years ago I would have let that one simple yet profoundly negative action of someone else affect me. My confidence used to be at such a spot that I would have never muttered a word to another soul all out of fear of receiving a rejection such as theirs. I would have easily crawled back into my shell of a person. But that was then and this is now.

As I sat at the thinking tree I thought about what had occurred and how different my thinking is. I didn’t care that I was the butt of their joke nor that my actions somehow provided them personal amusement. It’s that very cynicism that has our world so mucked up in the first place. I decided to not let it bother me and I approached each new person I encountered on the trail that day and since with even more personality and enthusiasm.

I continued to ride the trail and I saw the same young couple a few more times. Their purposeful laugh or sarcastic huffs as I said good morning or good afternoon didn’t phase me a bit.

A few weeks ago I stopped at The Daily Grind for my morning cup of coffee. Low and behold there at one of the tables sat the young couple. Our eyes met and they instantly huddled together to share a laugh at my expense. As I walked near their table three different customers said, “Good morning Steve!” I felt like Norm from Cheers coming in to find my stool at the bar. The people behind the counter know me and acknowledged me and we carried on a spirited conversation while I waited for my coffee. All the while the young couple watched intently as people chatted with me, hands were shook and it was obvious they were now on my turf.

I pretended not to notice. I played it cool as I finished up the ideal chit chat. I grabbed my coffee and headed back towards the door. The couple leaned into one another and were obviously sharing something about what they had seen and were giggling. I stopped and pulled out the empty chair at their table and sat down.

Their eyes were as wide as saucers. I extended a hearty smile and my hand and said, “Good morning my name is Steve – you know the good morning guy? We’ve seen one another on the trail a number of times and I just wanted to say hello. It seems like you both need someone to say good morning to you. Since it seems you find it odd for me to do it out on the trail I figured it might be more appropriate to do it right here. Well have a great day – nice to see you both.”

They didn’t say a word, I think because they were in such shock. I was told the next day by a friend at the next table that had seen this go down that they sat there with their mouths held wide open. The guy tried to puff up and say, “Who does that guy think he is?” To which my coffee friend replied, “That’s Steve Harper, the author of The Ripple Effect.” He pointed out my book which was displayed for sale on one of the shelves.

I was proud of myself. Not because I had made those people feel about three feet tall but because maybe they learned a valuable lesson. You never know when your words, your actions and your put downs may come back to bite you in the ass.

I write this only because last night for the first time in weeks I saw the young couple on the trail. The boys and I passed them and before I could even say it they both said in unison, “Good evening,” to which I said good evening back. I just kept peddling.

I smiled the rest of the way home.

Ripple On!!!
2010 Update: I’ve seen these people only a handful of times since then but they have always made it a point to say hello.  Our actions sometimes do rub off in a good way on other people.  Don’t let embarrassment or insecurity force you into your shell.  Take a stand and help people understand life is so much more rewarding when we make our own little attempts to connect.