Is That Smell Me? 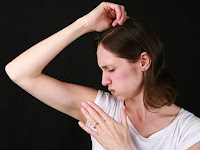 In fact it probably is.

Summertime networking can be quite treacherous.  Especially when you attend that after work networking function.

This year the entire country has been gripped by unusually high temperatures this summer which means by the time we leave our offices, jump in our hot cars, find parking, walk the three blocks to where the networking event is being held and enter the event well, we are, wait for it…

(thank you, I’ll be here all week)

We’ll be sweaty. We’ll be disheveled. We’ll  be downright stinky.

And of course with all of that going for us we’re now going to go in and try to impress complete strangers. I bet they can’t wait to meet you!

Does that sound like a positively awesome idea to anyone else? Me neither.

So what’s the alternative. Don’t go networking in the summer? Hmm, no.

Only network on cloudy days? Maybe but if you’re in Austin, we don’t tend to have many of those in the summer so that isn’t likely to work.

Move to a cooler climate? Like your thinking but let’s not get crazy.

Oh wait, I know, what if I were to have the limo pick me up and drop me off at the door of the event? Impressive but not entirely cost effective and a real pain to explain on the old company expense report.

If you know tomorrow you have an event to go to after work, plan for it.  That’s right! plan for it!

Take a fresh shirt, blouse or “whatever” you wear and have it in your car.  Chances are you’ve probably soiled your original top a bit anyway (working is hard after all) so you’ll be due to freshen up your look before you jump into impressing all those networking peeps anyway.

Use deodorant during the day, after you leave the office and before you walk in to the event.  True the homeless person in the alley may look at you strange as you quickly unbutton and pop on a new layer of your Ban Extra Strength before dashing around the corner to the event but what’s a guy (or gal) to do?  It will be the thrill of his or her day I can promise you.

Confidently walk in, grab your name badge and head immediately for the bathroom. Don’t stop at go, don’t collect two hundred dollars or look for your friends.  Go to the bathroom and grab a paper towel and run some cold water over it. Place that towel on the back of your neck, leave it there for a solid two minutes and then rewet your towel and dab, don’t drench, your face.  Take a few deep breaths, let your pulse come down which will help to cool you down.

Take one final check, both visual and aroma-wise (made up word for effect) and head out to meet and greet with confidence that you aren’t the one that everyone is smelling.